While other states increase protections, Louisiana is still the Wild West for the Menhaden Industry

The only possible conclusion is that the industry just doesn’t care.

All summer long, massive pogie ships have been seen harvesting in the shallow waters off Louisiana’s beaches and shorelines. Sometimes, the boats have been spotted making sets, using their giant purse seines, inside the shallow bays and inlets off of Plaquemines and St. Bernard Parishes, churning up bottom sediment and netting millions of pounds of critical forage and bycatch. Not surprisingly, there are countless reports of dead redfish and other species left behind.

Daybrook Fisheries (in Empire) and Omega Protein (in Abbeville and Moss Point, MS) remove nearly 1 billion pounds of menhaden and tens of millions of pounds of bycatch from Louisiana’s shorelines each year.

Earlier this week, multiple menhaden vessels were observed operating within ¼-mile of the coast. Sadly, this was not a surprise, as it has been a common occurrence along our coast in recent years. Remember that the Louisiana Wildlife and Fisheries Commission thought a ¼-mile buffer (excluding Breton Sound, which apparently is not important enough to protect at all) was an adequate step to address the problems those boats are causing. The industry promised, in formal testimony, to adhere strictly to the buffers established coastwide. But, even though the buffer is grossly inadequate, the menhaden industry refuses to abide by it.

I spoke recently to a charter captain from Plaquemines Parish who told me that he’s never seen the boats as close to shore as they have been this year. “They’re closer than ever this year, setting in places where the water is 5-6 feet deep,” he said. “Nothing can survive what happens when these boats set their nets. All that’s left when they leave is muddy water and dead fish.” I have received similar calls from many others.

Yesterday morning, Captain Travis Lovell of Dularge reported seeing Omega ships “running right over” the Pickets Artificial Reef, in 6 to 7 feet of water. Remember, these pogie steamers draft between 6-12 feet of water. They likely damaged the reef habitat that CCA, LDWF, and our partners spent millions to build a few years ago…a reef that provides a home for speckled trout, redfish, oysters, and various marine species and has become an extremely popular spot for recreational anglers.

When the menhaden industry says they “go where the fish are,” they apparently mean what they say, without regard for the damage they might inflict.

Earlier this year, Mississippi enacted a full 1-mile buffer across their entire coast where pogie harvest is restricted. Advocates in Virginia are working to remove the harvesters from state waters, where they have caused enormous damage to local fisheries. Meanwhile, despite overwhelming support from the public, the Louisiana House of Representatives and the Senate, political roadblocks have stalled meaningful pieces of legislation aimed at reasonable regulation in Louisiana waters. Thanks to Rep. Joe Orgeron and many others, the actions of these companies and how they operate in Louisiana waters are being brought out of the shadows and into the light. But real change in Louisiana has proven hard to come by.

The industry always claims they are doing no harm. Try telling that to the folks near Kiptoke State Park in Virginia, where Omega admitted to killing and releasing roughly 6 tons of redfish (about 12,000 lbs.) in a single netful a few weeks ago. For reference, pogie boats from Louisiana and Mississippi make about 11,000 sets each year in our state waters. Here is the article on Omega’s Virginia redfish kill. Beaches closed following Omega Protein’s dead fish spill at Kiptopeke State Park on Eastern Shore – The Virginian-Pilot (pilotonline.com)

One wonders how (or if) the incident in Virginia would have been reported had it not occurred near a state park and caused the closure of a crowded beach.

We all know these companies impact many non-target species like trout, redfish, shrimp, croakers, and drum. They are allowed to have up to 5% of their total harvest by weight in bycatch. 5% of 1 billion lbs. is 50 million lbs. of bycatch. Many act like the bycatch in this industry is insignificant. Really? The most recent data shows that more than 70% of the entire Gulf of Mexico menhaden harvest occurs within 3 miles of the Louisiana coast. (up from 54% in 1998.) As much as 300-400 million lbs. comes from Breton and Chandeleur Sounds alone. Historical bycatch studies performed by on-boat “observers” admit they have trouble estimating what is being harvested and don’t count any dead fish left in the water. Are we to believe that concentrating effort close to shore, with known limitations of bycatch observations, that there is no reason to investigate the trend of increased pressure within Louisiana territorial waters?

But even if you believe the bycatch numbers, the real issue is our lack of understanding of how taking about a billion pounds of forage from Louisiana’s waters impacts other fish and wildlife species, and how this style of harvest might impact our fragile habitats. To continue to rely on marginal bycatch numbers, supposed certifications based on standards that claim to include a legitimate accounting of possible habitat impacts, and disregarded minimal distance-based restrictions is simply irresponsible. Louisiana’s coast and the fish and wildlife that depend on those resources are far too important to continue with the status quo, acting like there is nothing to see here.

How can you help? Please continue sending your photos and videos when you see these activities near Louisiana’s shorelines and beaches, or when you encounter fish kills. Send them to us, and send them to your State Senator and Representatives. We must continue to shine a light on this industry and the damage being caused to our fisheries, our coastal wildlife, and our critical habitats.

CCA and the Gulf Menhaden Coalition will continue our efforts to protect Louisiana’s coastal zones from the effects of these damaging activities in Louisiana waters. Our commitment and resolve to righting this wrong and pursuing reasonable solutions to this problem are unwavering. To learn more about our efforts or our coalition of conservation partners, please contact CCA Louisiana at 225-952-9200 or email me at david@ccalouisiana.com. 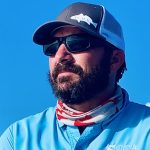 David Cresson has been the Executive Director/CEO of CCA Louisiana for 15 years. He is a native of Louisiana, an avid saltwater angler and a life-long outdoorsman. In its 39th year, CCA Louisiana is the largest marine resource conservation group of its kind in the state. With more than 30,000 members and volunteers in 30 local chapters, CCA has been active in state, national and international fisheries management issues since 1977.

They’re taking everything’: Banned in other states, pogy ships catch all they want in Louisiana– NOLA.com