CCA’s REEF Louisiana, Building Conservation Trust and LDWF recently completed the reef in honor of local conservationist, where platforms have been removed

CCA Louisiana dedicated the reef in honor of Acadiana area conservationist and U.S. Naval Officer Z.T. “Jack” Cart for his lifetime of service to Louisiana.  Mr. Cart, a businessman from Crowley, was a dedicated husband (to Helen) and father of 6, a distinguished World War II veteran, a football captain for Southwest Louisiana Institute (now University of Louisiana), and a lifelong outdoorsman and conservationist. 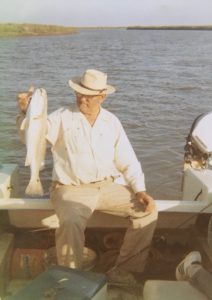 “My dad was one of a kind,” said Steve Cart, Jack’s youngest son. “He taught us everything he knew about the outdoors, and how to be responsible mariners and anglers. Behind my mom and his kids, coastal Louisiana was his love, so building this reef in his honor seemed like a fitting way to help honor his legacy.”

“My dad taught us the value in conserving resources… he was a conservationist before the term was cool,” said Mike. “When most folks in Louisiana filled freezers with fish and game because they could, Jack hunted with a .410 and fished with a fly rod. He was crack shot and elite fisherman, but you would never hear of his expertise from him. He lived a full life serving his family, friends and his country, never seeking accolades for himself.”

Andrew Cart, another of Jack’s sons in attendance, said his dad never left his kids behind.

“Dad would get invitations to fish and hunt all over Louisiana, and if his kids weren’t invited to come along, he would politely decline,” he said, as he surveyed the room full of generations of Cart family members. “Now, we can take these kids out to one of dad’s favorite old spots and tell them stories about their great-grandfather, on a reef named after him. This is really special”

The night was filled with stories, memories, smiles and a few tears as family members and friends took turns speaking about Mr. Cart. CCA Louisiana CEO David Cresson was on hand to celebrate with the family.

“This is an amazing tribute…an incredible way for the Cart family to honor the legacy of Mr. Jack,” said Cresson. “The site the family chose for this reef was a platform they fished with their dad when they were growing up. Now that we have replaced the habitat lost when that platfom was removed, the Carts will once again get to enjoy that spot with their family.”

The reef was built to replace habitat in an area where oil and gas platforms have been removed at an approved site selected by the Cart family.  The reef was built using a “modular grid” design, in which 20 separate clusters of large, recycled concrete material were placed in rows and columns covering several acres of sea floor. Each small cluster will create its own “feeding halo,” providing for a rich and productive habitat. The reef is in about 25 feet of water and situated in a way to optimize water conditions and bottom contours, creating the best possible fisheries habitat.

CCA’s VP of Habitat John Walther oversaw the completion of the project.

“Projects like this are not easy, and take a long time to put together,” said Walther. “We are blessed that the Carts chose to honor their dad in this way, and for all the partners who worked together to see it through to completion. We are especially thankful to The Department of Wildlife and Fisheries, CCA’s Building Conservation Trust, Romeo Papa Boats and Road Rock Recycling. We could not have completed this project without their efforts.”

“The Carts have been active in our Cajun Chapter since we started more than 25 years ago, so it’s a pleasure for all of us to be here celebrating this special event with their family,” said Waldmann. “As a founding member of the REEF Louisiana program, I hope others will be inspired by the Carts and the way they have honored Mr. Jack.”

GPS coordinates for all CCA reef projects can be found here.

REEF Louisiana is in the process of completing an 8th nearshore project, in West Cameron Block 45, and has additional projects planned for the coming months at South Timbalier 165 and Eugene Island 51 & 74.